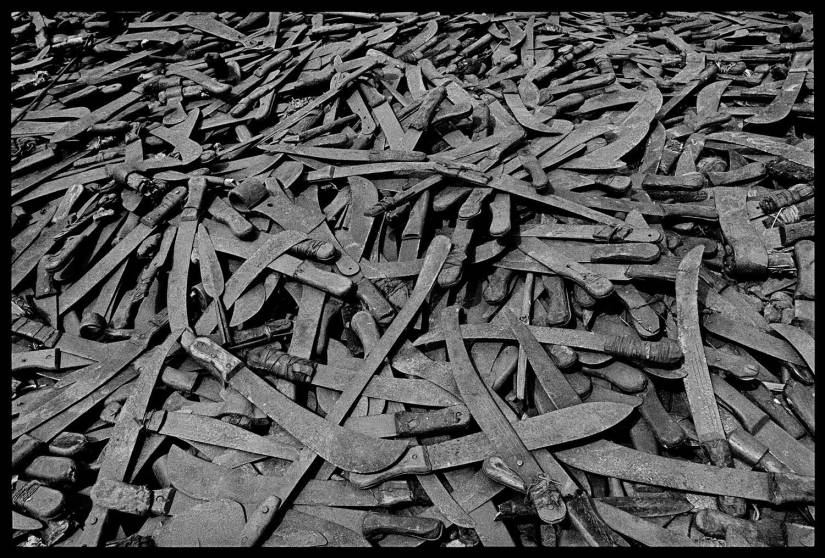 Both Sontag and Gourevitch approached human tragic from the perspective of people born with the privilege of witnessing such tragic as a bystander. They both talked about how people with such privilege are not in direct relationship to those who suffer. They don’t necessarily care about them. The commercial value, the benefits they could profit from such crises matter more. Sontag mentioned the idea of “self-censorship” in media, which describes how government authorities actively look away from the suffering for the political and social benefit of that “victorious” power. And this “self-censorship” isn’t only evident in media: one example is the fact that “Washington didn’t want to act. So Washington pretended that it wasn’t genocide.” The international community is actively looking away, knowing what is happening, but at the same time doesn’t want to face the moral challenges it poses in front of us. Another idea mentioned in Sontag is the identification between camera and gun, between “shooting” a subject and shooting a human being. “The scale of war’s murderousness destroys what identifies people as individuals, even as human beings.” This bring to my mind the institutional identity mentioned in Prof. Tamura’s lecture. The distance offered to the viewer by the photograph, as well as the distance that international community feel about the issue of Rwanda, under such a huge picture, allows each small individual to be reduced to their institutional identity. Another connection that can be made is that both authors looked at these issues with a perspective similar to that of Hannah Arendt before Eichmann’s trial. Both authors believed that these killers were evil in nature. “It’s easier to think of the enemy as just a savage who kills”, who is monstrous in nature. This is also evident in that the Rwanda catastrophe is widely understood merely as “a natural disaster”.