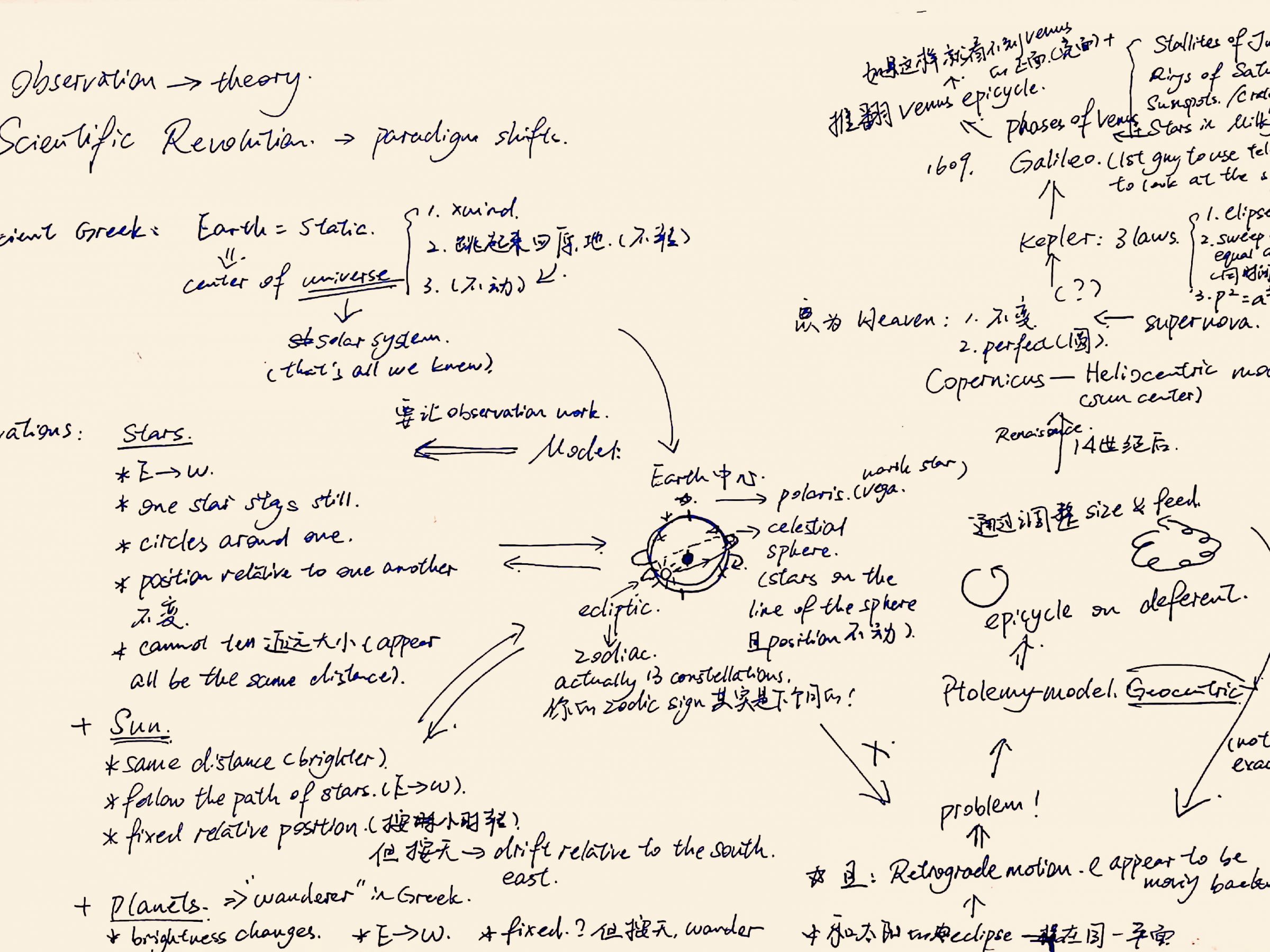 Revolution is the drastic conceptual scheme or power shift resulting from accumulating “exceptions”, “errors,” or “deficiency” that make the previous conceptual scheme insufficient. Such revolution often involves an impactful upheaval after a relatively longer time of passive acceptance, question and doubt, and searching for alternative conceptual schemes.

In the scientific revolution, the early astronomical models—Aristotle’s concentric spheres, Ptolemy’s epicycles—are all geocentric. The conceptual scheme is largely formed from their religious motivations for scientific investigation: to position the superlunar world within “the Great Chain of Being” that connects the God, humanity and nature. However, with increasing astronomical motions unable to fit in the previous explanations, the focus shifted towards striving to maintain the best accuracy in predicting planetary positions or physically satisfactory system.[1] Alternative conceptual schemes formed: George Peurbach, Copernicus, Keplar started placing the sun in the center. The motivation behind didn’t change much: the belief of the inter-connected world and heavenly bodies can extend certain influence on earth. However, the scientists no longer merely seek for an explanation that satisfies religious beliefs, they added another realm to their new conceptual scheme: physical reliability. The same shift in conceptual scheme is also prevalent in humanities. The outcry of “Property is Robbery” in Paris, 1840 is a revolution against a system, a language and a society built on the opposition between “proprietor” and “robber.”[2]

The upheaval may occur positively in that it directly strive for the more satisfactory conceptual scheme, but it can also occur negatively in amplifying the “deficiency,”—it is through all the “calamities” caused from an ignorance towards “justice, equality and liberty”[3] that a new conceptual scheme is realized. The England revolution against inefficiencies in 1941. It was a “conscious open revolt by ordinary people,” not confined to any class, “against inefficiency, class privilege” and the rule of Chamberlain. This arose from years of wealth inequality and aims for nationalized industries and demolishing private incomes. Conflict existed, as the working class would suffer terrible things.[4] Another example is WWII in that it not only achieved “a fundamental shift of power,”[5] but also brought the word “genocide” onto the table. Scholars like Arendt, who proposed the idea “banality of evil” in explanation of thoughtless process of normal individuals that promotes mass murder, offered new insights into this history and humanities.

Moreover, what qualifies a revolution depends on current values. Events are defined as revolutions not by contemporary people but rather people in the present or future. Based on current values, costs and benefits, some events are filtered out. Prof. Quillen mentioned in her first lecture, that countless things are happening at the same time, we choose what are significant and are qualified to fall under human experience. The documentation of events also involves multiple stories: “the victors write history.” The word revolution now has a positive connotation that when we talk about revolution the first events are often Civil Rights movements, Renaissance, scientific revolution, those that deemed to be leaps that approaches current human values: equal rights, freedom, aesthetics, productivity. However, being equally crucial to the strive for human rights, Haitian revolution was barely talked about, even denied and erased from history. Thus, the definition of revolution is dependent on the conceptual scheme from which it is created.

See Next page for definition part 2