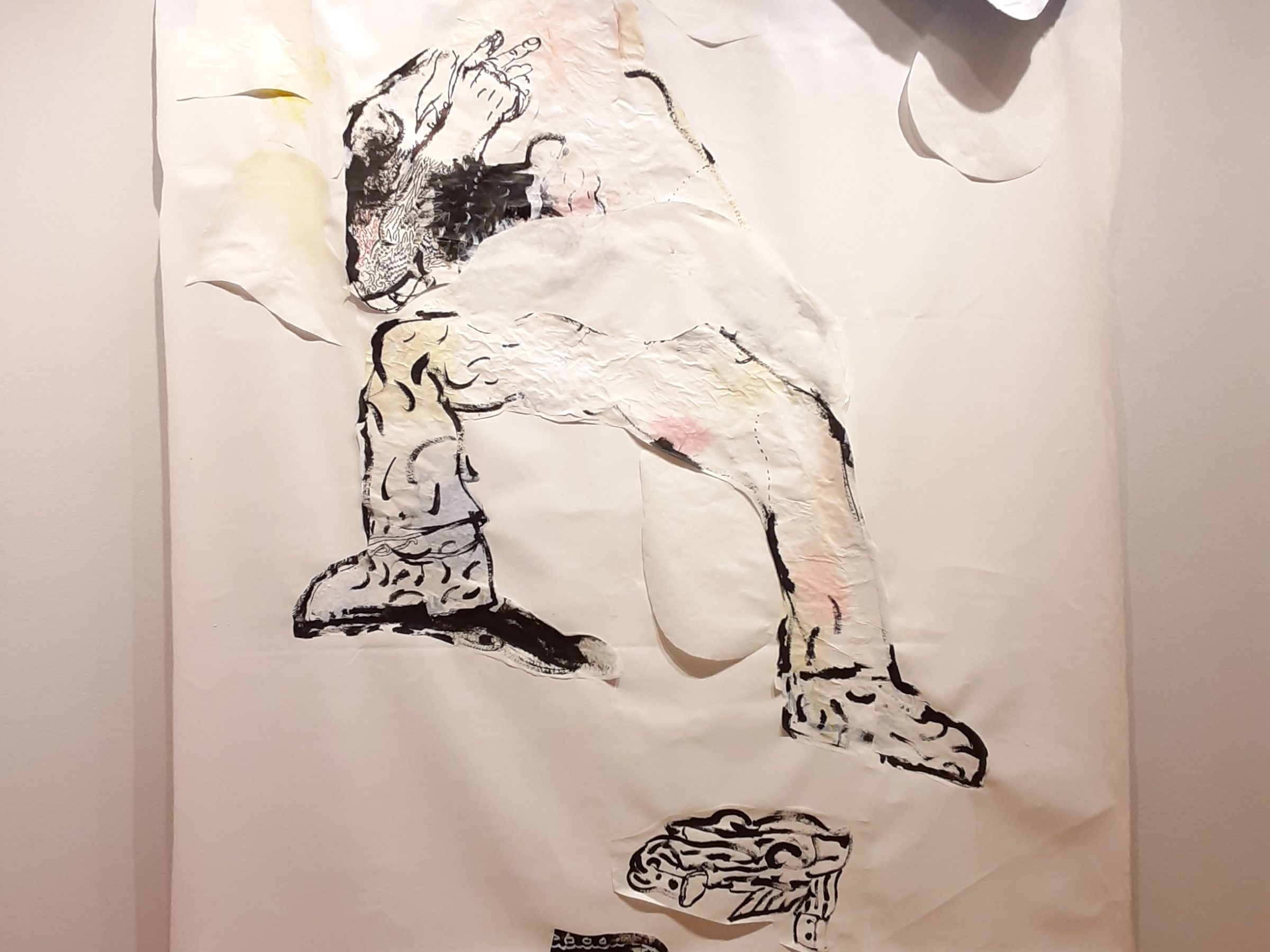 Reflection on Drawing on Butcher Paper by Jagath Weerasinghe

During the opening reception for Crossing Border, I had a chance to talk with the artists Jagath Weerasinghe from Siri Lanka about his work Drawing on Butcher Paper. The work inspired me for a reflection on the self and the act of violence.

Weerasinghe’s work in this exhibition presents a border between presence and the inner self, an introspection on the breakdown of moral and ethical conflicts as well as the integrity of a human being. His first reflection on crossing the border comes from his experience at security checkpoints. At these checkpoints, Weerasinghe said he felt “being defined,” “people see you as a potential terrorist because you are from Sri Lanka.” This is reflected by the dozen backpacks that has to be taken off and left at the border, which represent a dehumanizing process since people are being reduced to a single identity categorized by the degree of danger assigned to their possession. This immediately brought me back to the story of Amin

Maalouf, who, in his article Deadly Identities, discussed what defines his identity. He was forced to choose between a French and a Lebanese. People not only assume that one has only a single identity, but also assumes what the identity is, based on one’s appearance in the case of Jagath Weerasinghe. During the suicidal bomb attack in Siri Lanka on April 21th, 2019, the terrorists carried black backpacks into the hotels and churches. The black backpacks are what we see, their black color and the bold strokes depict the fear towards the unknown, the suspicion among the society, the insecurity among the people, presented in a two-dimensional manner as if it was in the mind rather than in reality. But ironically, under the veil of fear, suspicion, and insecurity, are things as banal as papers and brushes. During the civil war in Sri Lanka, and in fact in any social unrest, such fear aroused by violence is what deprives people of their ability to see what is truly inside.

What is particularly interesting is the artist’s choice of material, the butcher paper. “Such a brutal name for a delicate piece of plain paper,” Weerasinghe exclaimed a few times. The semi-transparent paper not only blurs the color under it, but also the notion of its presence, and makes it even more ambiguous the state of presence. This invites the viewer to seek their own identity, to find inner integrity. But the blurred color patches are distributed as if in pieces also represents a sense of losing the integrity. The black decoration on the right hand of the central figure is a tattoo, symbolizing noble savages, an outsider, an other who has not been contaminated by civilization, and thus the central figure represents the innate nature of human beings. However, the fact that the figure doesn’t have a face, resembles the violence of reducing and objectifying people at borders and the loss of integrity. Pieces of round butcher paper surrounding the figure compose together a semi-circle with the end dripping down. The circle can be seen as holding the “integrity” and keeping the inner self in place. 6 pieces of limbs are placed next to the central figure. There is a religious representation here with a pair of hands holding together as if worshiping; the feet staying close to each other and the open hand on each side resemble the body position of crucifixion. Moreover, the limbs are depicted from the first-person perspective, like looking at one’s own hands and feet. This visualizes the border between external and internal self, confronting the body as an other in front of your own consciousness, consequently stripping away the “body” where our consciousness hides and the innocence that people put on as an excuse for thoughtless processes. This can be seen as an accusation Weerasinghe puts towards any form of thoughtlessness and conscious forgetting among the Buddhists in Sri Lanka who provokes justification into violence, being caught up in the moment, couldn’t cross the border to ponder on the consequence and essential reason for such action. Moreover, as how Simone de Bouvier talked about Otherness assigned to Women so that they can stand in contrast to Men and make men Men, the otherness presented in Weerasinghe’s work presented the other so that we see ourselves as We. For me, when I was looking at the work, I experienced myself the process of definition and exclusion that I often do to others. And if everyone can experience this ourselves and can critically realize the dehumanizing aspect of our behaviors, there may be less discrimination and more understanding between the One and the Other.